Last night before calling it a night I headed out to the garden to see if any plants needed a drink, some pruning, or a bit of a pep talk. It had been hot and humid, well above 90 degrees, and sunny most of the day. Having been such a hot one, Hubby and I hid out in the house catching up on anything we could find to do that didn’t require leaving the comfort of our air conditioning. Being on the inside looking out all day, the day seemed calm, almost tranquil, an illusion that would soon be set to right.

As I rounded the corner of the house and peered at my tomato garden the first thing I noticed was one of the yellow pear tomato plants that was planted right next to the house on the ground. What was strange about that, other than tomato plants don’t typically lay flat on the ground, was that the cage surrounding the plant as well as the 4-foot plant stake the tomato plant had been clipped to were on the ground too. The cage and stake had been pulled completely out of the ground.

Panic set in as I ran to the plant to survey the damage. Thankfully the stem had not broken. In fact, other than it being on the ground rather than standing its full height of more than 4 feet, it was perfect. As I picked up the cage, plant and stake and began positioning them back in place and in the ground I began to wonder how this could have happened. My first thought was that some neighborhood kids had decided to vandalize my garden. Not that this sort of thing happens often, but things do happen on occasion. I hated to place blame or even think such a thing, but it did not seem possible that wind could cause something like this.

Once the plant was securely in place I returned to surveying the remainder of the tomato plants. Looking into the garden that holds 33 of my plants I noticed one of the plants looked odd. The plant closest to the end against the house had been nearly 5 feet tall, and now I looked as if it weren’t there at all. 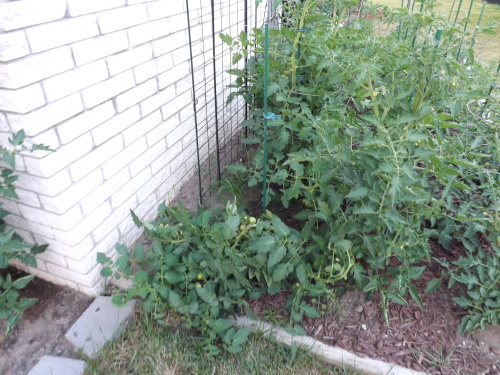 Closer inspection revealed that this plant was split completely in two.

Now I was really mad. Had some kids thrown a basketball into the garden and taken out one of my two cherry tomato plants? Had some dog chased a rabbit into my yard and barreled through the garden in so doing? What was going on?

I was devastated. The plant was full of huge cherry tomatoes, some even on the brink of turning red. There had to be more than 50 tomatoes on this plant. It was full of lush thick leaves that seemed to multiply daily even though I pruned them constantly.  There were branches full of flowers and the beginnings of yet more tomatoes. I’m not exaggerating when I say this one plant would have no doubt yielded more than 100 tomatoes on its own.

Standing there, heart-broken, I bent over and grabbed one half of the plant. Carefully I lifted it, noticing immediately how heavy it was. Gingerly placing it back on the ground I lifted the other half. This half was even heavier. The wheels in my head began to turn.

Standing back up I examined the area where the plant had stood. There was a sturdy 4-foot garden stake still standing with the plant clip attached. Reality was beginning to set in.

This wasn’t the work of some feisty neighborhood kid or rambunctious dog on the rampage, no this was far more serious. This was something that would surely threaten every tomato plant in my garden if I didn’t take action.

Honestly, with all the difficulties I have had this summer with my tomato plants, having TOO much fruit was one problem I never thought I’d have to deal with. The heat and humidity have caused the tomato plants and their constantly multiplying tiny tomatoes to grow faster and larger than their stems and trunks can handle.

Looking closer at the other plants in the garden I noticed branch after branch laden with tomatoes bending close to breakage toward the ground. Even though every plant had been staked and most had cages around them as well, they were far too big and heavy for their own good.

Back to my split tomato plant though.

Before I could address the rest of the garden, I needed to fix or at least try to fix this cherry tomato plant.

Tomato plants are very resilient and even when struggling against blight, sun scald, leaf curl, or any of the other countless things that can go wrong when growing tomatoes, they somehow overcome. Branches or even the trunk of the plant splitting is no exception.

My first task was to set the trunk back together as best I could so it could heal. I didn’t have anything to treat the wound with, to protect it against pests, so I set the sides as close together as I could and used additional plant stakes and clips to set it in place. It took four heavy-duty stakes and seven clips to put Humpty-Dumpty back together again, but in the end I think it looks pretty good. 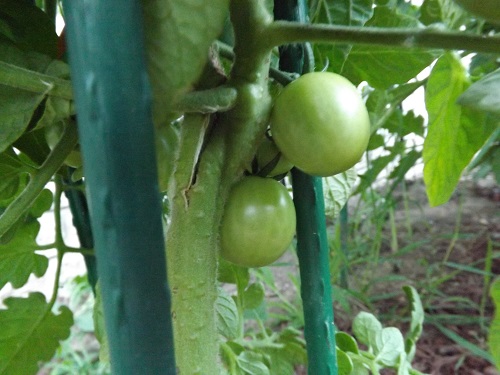 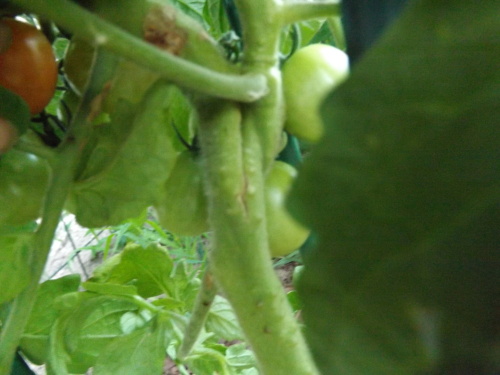 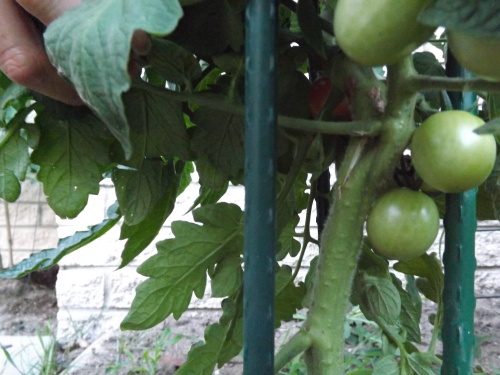 With this plant now secure and off the ground I set to work on the rest of the garden. I added additional stakes to every plant, some even two or three, and placed clips to secure branches and trunks as far down as I could. Here are just a few of the other plants with the additional supports: 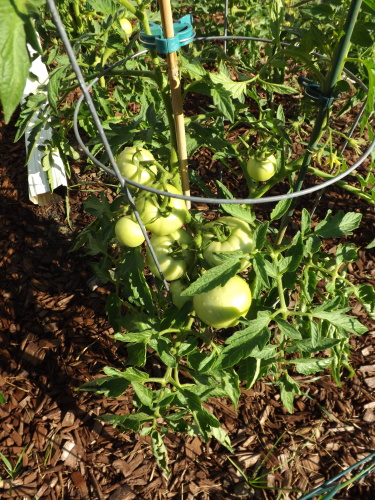 This morning when I checked the split cherry tomato plant I was thrilled that it was doing fine. I had expected it to be withered and the leaves and branches to be drooping toward the ground. Surprisingly it was fine. The leaves were fresh, the branches stiff, and none of the tiny tomatoes had fallen off.

Last year my plants were heavily laden with fruit as well, but it was later in the season and the trunks and branches were developed enough to withstand the weight. This year the plants need to do a little catching up, although already many of the plants are more than 5 feet tall.

Hubby suggested I thin the tomatoes a bit, something about “too much of a good thing.” I don’t have the heart. It’s been a long road to get the plants where they are and I’m going to do whatever it takes to harvest each and every one of the tomatoes. I think they’ve endured enough and deserve the opportunity to thrive the best they can, and for this I am — Simply Grateful.

10 thoughts on “Tomato Plant Woes – Splitting Down The Middle”

A Christmas Carol Without The Ghosts – Broken Hearted

Nothings Ever New — It’s All Been Done Before

Tilly’s Law of the Multiplying Multiplicity of Leftovers

High Hopes for a Fruitful Summer

Prepping Anaheim Peppers for Canning – Toning Down The Heat