Back in early May I planted two six-foot rows of carrots, watered them, and then waited. For nearly a month I checked and watered the carrot rows without any growth. Then about a week into June a few plants finally sprouted.

Disappointed I decided to replant, this time using a different type of carrot, where no carrots had come up. It has now been nearly a month since I planted and only a few more carrots have shown themselves. 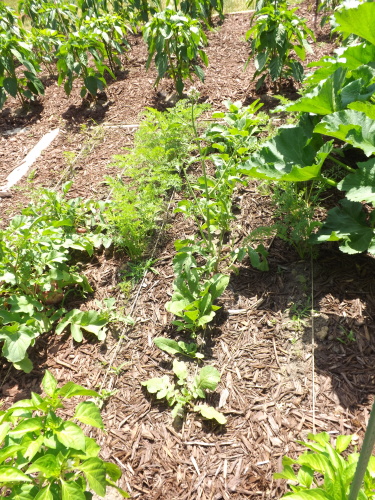 This is the carrot and radish section of the garden. Carrots are supposed to be in rows 1, 3, and 5. Not many to be seen.

Yesterday I harvested what was actually usable of the first planting of carrots, about two months after being planted, and found them to be small and many of them were carrot creatures. 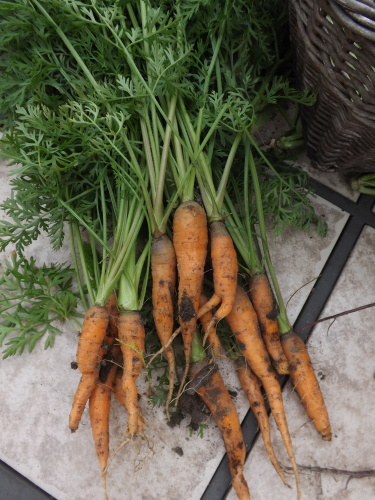 I planted three rows of carrots, twice, and this is pretty much more than half of what actually came up. Not much of a harvest, but they are sweet.

Back in 2014 when I had my carrot garden in a different location I also had some carrot creatures, but they were at least big, this years are tiny. Check out my post at Simply Grateful Housewife Carrot Creatures.

So why can’t I get my carrots to grow? Is it the new location? Is it the soil? Is it the seeds? Well once again I headed to the computer and the Internet for some answers. Turns out it’s not the location, soil or the seeds. It’s just me!

Yep, turns out whenever I’ve planted carrots in the past we have had typical Michigan weather. This means we would have regular rain fall. This coupled with me watering the garden in between rain falls assured my carrot growing success.

This year Michigan has been dealing with a terrible drought. Since the end of May we have had no more than 1″ of rain. In June there were four days when there was any measurable rain and so far this July we’ve had one day. Now I do water, but only every other day, sometimes every third day (especially right after the water bill comes in).

According to the information I read, carrots need to be watered each and every day after the seeds are sown into the soil without fail. It isn’t a matter of watering them when they are dry, it is keeping them in a constant state of being wet. This means that for the entire time of germination, which can range from 12 to 18 days, I should have been watering the rows of carrots. Without that, they didn’t have a chance.

The few that actually did germinate and finally grow were a gift, or if you’re a pessimist a slap in the face. I’ll go with gift here for now.

As for the Carrot Creatures I have, well that is the result of planting my carrots in clay. We don’t enjoy the luxury of wonderfully loose soil in our area. We have tightly compacted clay and the three to six inches of top soil that I’ve put on top of the clay doesn’t give the carrots much room to spread out. Unfortunately this probably isn’t going to change because I don’t have an area in the garden that I can build up a foot or more of dirt for them to grow. Although this might be a nice project to consider for a box garden.

Last year I built a box to grow potatoes in and placed it in the garden right along the other rows of potatoes I’d planted. The theory around the box garden was that by hilling the potato plants as they grew and building up the sides of the box, I’d end up with a box full of potatoes by the end of the summer. Well, this didn’t happen. In fact I ended up with less than a handful of potatoes. It is entirely possible I did something wrong, but after that incident I decided that potato gardening was just too much work for not much yield. 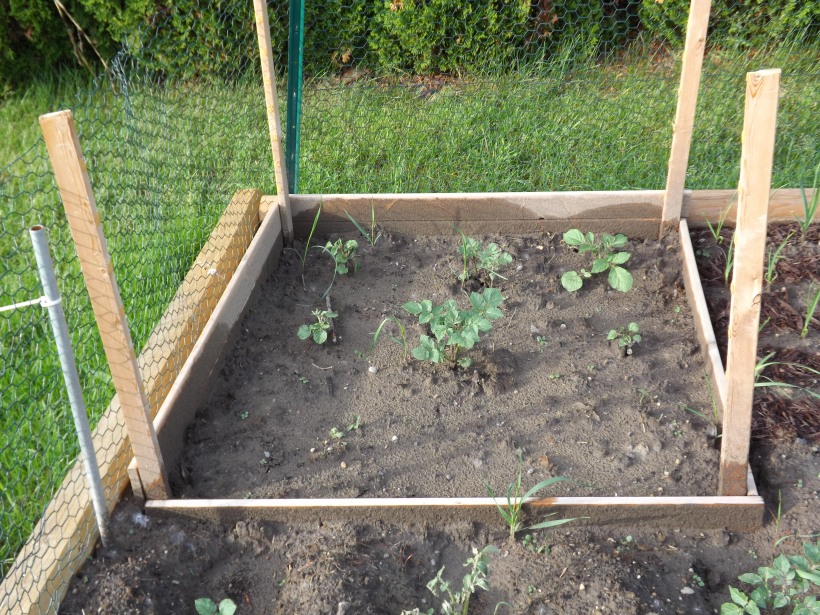 This is the first level of the potato box with the potato plants sprouting up. 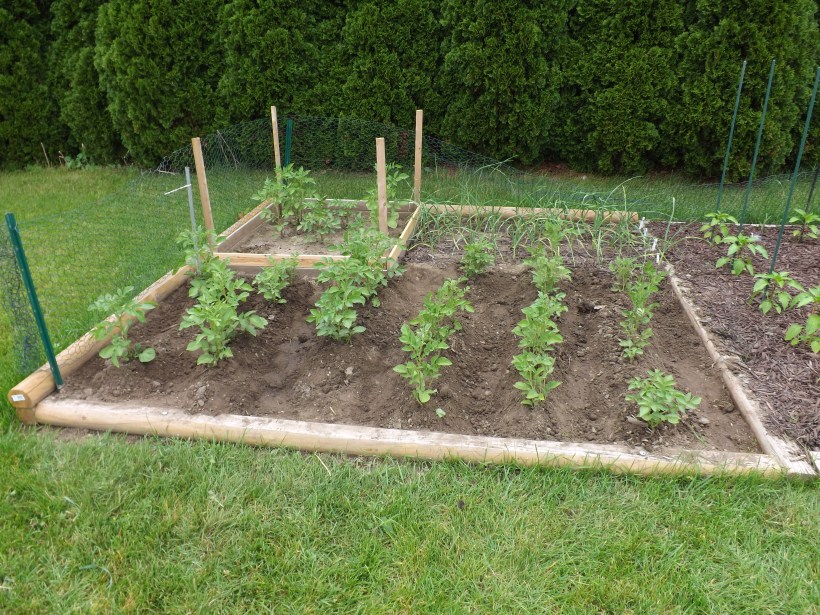 As the potato plants grew, I added more boards on the sides and filled the box with dirt. 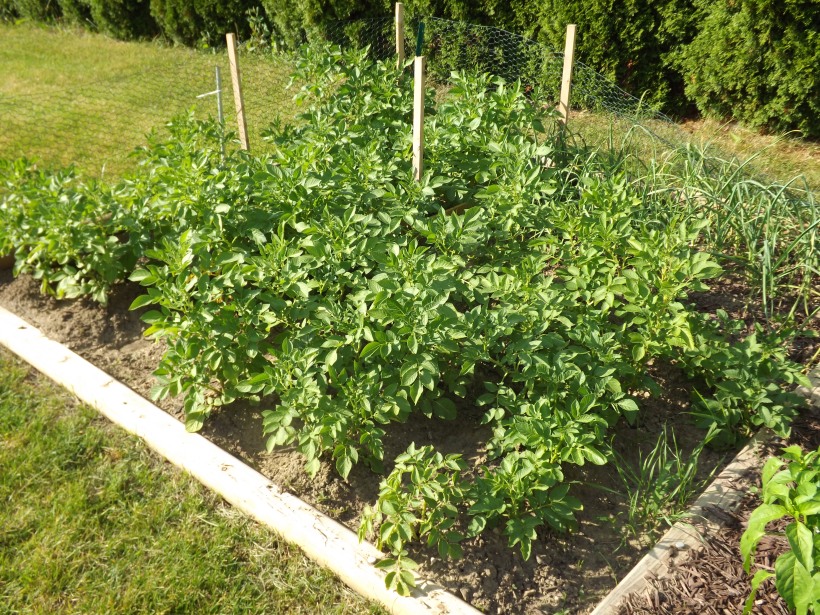 By fall the box had five levels added and the potato garden looked like this. 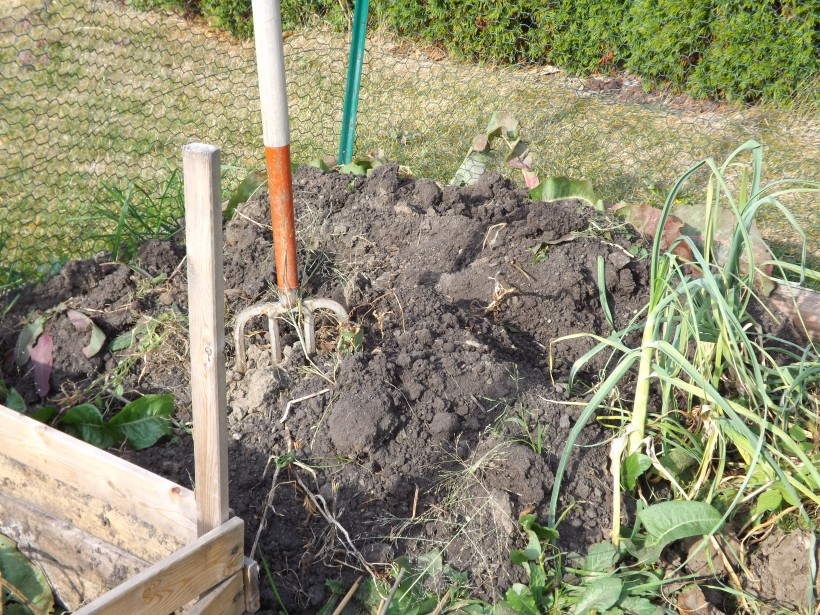 When I removed the box and dug up the plants, there was nothing to be found.

Building up a small area in the existing garden using the boards from the old potato box might be a good option for next year for growing carrots rather than Carrot Creatures. (See Suzanne, even when something doesn’t necessarily work, it still has the potential to inspire – Thanks!) I won’t need to hill the carrots or build up the box as they grow, but a box built within the garden or along side it…now that might work.

So what have I learned? First and foremost, when I plant my carrots I will water them DAILY until they sprout. This is the only way to make sure they germinate. Second, if I want long straight carrots I’ll have to do something about the clay. Otherwise I’m destined to enjoy visitations from Carrot Creatures.

At any rate, another lesson learned in the garden and I am that much smarter (or so I think) for it, and for this I am — Simply Grateful.

5 thoughts on “Why Aren’t My Carrots Growing?”

A Christmas Carol Without The Ghosts – Broken Hearted

Nothings Ever New — It’s All Been Done Before

Tilly’s Law of the Multiplying Multiplicity of Leftovers

High Hopes for a Fruitful Summer

Prepping Anaheim Peppers for Canning – Toning Down The Heat